You are here: Home1 / Buy sell gold bullion2 / How the Russia/Ukraine Conflict is Affecting the Markets. 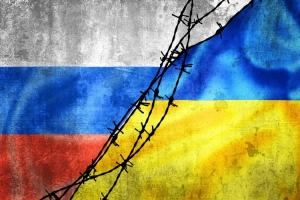 Setting aside the obvious outrage that Russia’s invasion of Ukraine has caused, we look at how this conflict is affecting the markets.

The pan-European Stoxx600 provisionally ended down 0.2%, with banks plunging 4.4% to lead losses on the back of fresh sanctions with Russia.

The Russian advance into Ukraine continued throughout the weekend with even further military numbers advancing on the Ukranian capital Kyiv early this week. Russian military vehicles entered Ukraine’s second-largest city Kharkiv, with reports of fighting taking place and residents being warned to stay in shelters.

More sanctions have been imposed on Russia from governments worldwide, for its invasion of Ukraine.  The U.S., Europe and Canada agreed on Saturday to remove key Russian banks from the interbank messaging system, SWIFT. The U.K. and EU have also closed their airspace to all Russian aircraft, including the private jets of the Oligarchs.

Russian Invasion of Ukraine – How Can It Impact Investors?

The bounce in markets observed during Thursday and Friday last week seem to be related to the announcement of sanctions on Russian businesses and individuals closely tied to the Putin regime. Notably, the energy sector was spared from the worst of the sanctions, ensuring that Russian oil and gas can continue to flow to Europe. Oil futures were up around 3% and the Russian ruble initially dived around 29% against the dollar early on Monday morning before recouping some of its losses, as markets assessed the impact of sanctions on Russia.

Gold prices immediately climbed nearly 2% on word of the invasion – and continued to their highest level in more than a year, underscoring its safe-haven appeal to investors fleeing risky assets like shares.

The yellow precious metal rose as high as €1,765 (and usd$1,973) with large volumes of trading seen worldwide, as investors flocked to the traditional safe-haven.

Gold continues to firm, despite a strong dollar as the market moves towards the safety precious metals, seeing as they are “strong stores of value”, said Carlo Alberto De Casa, external market analyst at Kinesis.

The outlook for gold seeming to be that, as long as the tensions in Ukraine continue the strong gains could continue, even setting a new baseline price for the metal.

Oil prices have been increasing steadily for months now as supply remains relatively tight due to some production issues and increasing demand as economies open up. According to the New York Times, “Russia produces 10 million barrels of oil a day (roughly 10 percent of global demand) and is Europe’s largest supplier of natural gas, a critical fuel for power plants and for heat”. Since Russia provides 10% of the world’s oil, prices could increase even further if supply from Russia is tightened or sanctioned. However, the US only imports 3% of its oil demand from Russia, and is currently in talks with Iran to close a nuclear deal, which might alleviate some of the shortfall if there are sanctions placed on Russia.

Federal Reserve President James Bullard warned recently that urgent action was needed by central banks to combat the high inflation that’s occurring. He called for a full 1% increase in rates by July this year. Market expectations already appear to be expecting a hike in March since the Fed has indicated as much, but there’s still some uncertainty about whether it would be a 0.25% hike, or a 0.50% hike. For the whole of 2022, it appears that markets are mostly expecting 5 or 6 rate increases of 0.25% each.

If interest rates increase, those stocks with a lot of their value derived from distant future cash flows are the most impacted, since those cash flows are worth less if we discount them back to today’s value at a higher rate. Therefore, High Growth stocks are usually negatively impacted the most.

Events over the next days and weeks will likely move quickly and market reactions will likely be unpredictable and erratic. As an investor it is a good idea to keep an eye on any further sanctions that get announced, as they will affect the supply and demand economics of various commodities, goods and services, which could affect the companies or commodities you have invested in.

The next Federal Reserve meeting is coming up in mid-March (15-16th) and the expectations for rate hikes are likely to unfold, it just appears to be a matter of whether it’ll be a 0.25% hike or a 0.5% hike.  Stay informed, watch the markets and pray for all those affected by this unimaginable turn of events.

If you would like to find out more about buying gold call us today and we will be happy to discuss your options.

Although every effort has been made to undertake this information with care and diligence, Core Bullion Traders do not guarantee the accuracy of any forecasts or assumptions. Nothing contained in this presentation constitutes an offer to buy or sell securities or commodities and nor does it constitute advice in relation to the buying or selling of investments. It is published only for informational purposes. Core Bullion Traders does not accept responsibility for any losses or damages arising directly or indirectly from the use of this presentation or data.

The History of Gold