You are here: Home1 / Buy sell gold bullion2 / The History of Gold

The History of Gold. 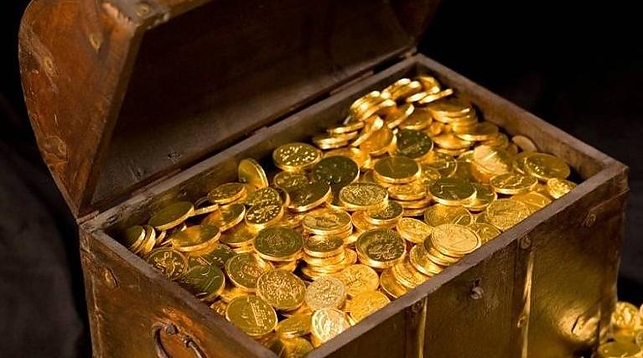 Voluminous tomes have been written about Gold and the history of gold. So, we thought we would do what we always do….simplify everything!

We have been asked so often about how and why gold is so valuable, that we decided to give you a (brief!) history of gold.

For centuries wars have been fought over gold, love has been expressed with gold and gold has changed the landscape of civilizations around the world. But what makes gold in such demand, even today?

Gold is incredibly rare, with all gold mined since the dawn of civilization (approximately) fitting into a 20mtrX20mtrX20mtr cube – that’s about the same volume as an Olympic size swimming pool. The best estimates currently available suggest that around 197,576 tonnes of gold has been mined throughout history, of which around two-thirds has been mined since 1950. And since gold is virtually indestructible, this means that almost all of this metal is still around in one form or another. If every single ounce of this gold were placed next to each other, the resulting cube of pure gold would only measure around 21 metres on each side. Another interesting fact when comparing gold to other precious metals, such as silver, is the fact that there is more silver mined every single week than there has ever been gold mined in the history of records!

Gold and the Ancients

The Egyptians were amongst the first to use gold for decorative purposes. As far back as 3600BC the Egyptians were the first to smelt gold, Hieroglyphics describing gold date back to 2600BC, King Tutankahmun’s funeral mask was created from gold and around 1200BC.  Egyptians also invented the ‘lost-wax’ technique to create jewellery, which is still used to this day.

Move forward to 564BC and in present day Turkey, the Lydians mint the first ever gold coins for trade purposes. Around the same time as this the ancient Chinese begin circulating the ‘Ying Yuan’ – a square gold coin.

A century later and Alexander The Great sacks the Persian Empire and loots their legendary gold treasury. The Greeks, realising the value of gold, begin to practice Alchemy – the quest of turning base metals into valuable gold!

Moving closer to a new Millennium in 58BC Julius Caesar famously brings back enough gold from a victorious campaign in Gaul to give 200 gold coins to each of his soldiers, AND repay all of Rome’s debts. The Romans are the first to use gold as a widespread currency system. They also invent new ways to extract gold on a large scale through hydraulic mining – a method still in use today.

In the 14th Century the famous Spanish gold galleon’s are traversing the worlds oceans in search of gold and bringing it back to Spain. King Ferdinand of Spain tells his explorers:

“Get gold, humanely if you can, but at all hazards, GET GOLD.” Within years, the Inca and

Aztec civilizations, who use gold in their worship, would fall to Spanish Conquistadors.

In addition to its rarity, gold’s properties made it an obvious choice for currency. There are many factors that lead to gold being used as currency; Gold is easy to press into coins and bullion, it is also easy to identify because of its density and colour. Gold does not tarnish or rust making it ideal for long-term use and long lasting. This most valuable of precious metals gave rise to the concept of currency itself by being portable, private and permanent – values which keep it in the precious sphere of desirables to this day.

Over time, countries adopted the ‘Gold Standard’ as a monetary system, where currency would be fixed to a weight of gold. Great Britain was the first to do this, and its economic power put pressure on other countries to follow suit. In the 19th century, all major countries other than China had adopted the Gold Standard. Part of this was due to silver becoming more abundant and declining in value – for example in the 16th century gold was 15.5 X times more valuable than silver, whereas by the 20th century gold had become 50 X times more valuable than silver.

Moving closer to modern day, the 18th & 19th centuries saw major ‘Gold Rushes’ in North America with hundreds of thousands of prospectors travelling to North Carolina, California and the Klondike in particular.

To this day gold continues to be a vital component to industry, even being utilised in space travel, as its lustrous surface is used to reflect the sun’s dangerous radiation that would otherwise harm astronauts and their equipment, indeed the Space Shuttle contain approximately 40Kgs of gold in various guises. Today’s gold reserves are estimated at 171,300 Tonnes – with 31,000 Tonnes held by various Governments, Central Banks and International organizations.

We can conclude therefore that gold is an extremely unique, useful and versatile metal. It has proved irreplaceable throughout the ages in applications as varied as human history itself. Its story is far from over…

If you would like to find out more about buying gold call us today and we will be happy to discuss your options.

Although every effort has been made to undertake this work with care and diligence, Core Bullion Traders do not guarantee the accuracy of any forecasts or assumptions. Nothing contained in this presentation constitutes an offer to buy or sell securities or commodities and nor does it constitute advice in relation to the buying or selling of investments. It is published only for informational purposes. Core Bullion Traders does not accept responsibility for any losses or damages arising directly or indirectly from the use of this presentation or data.

How the Russia/Ukraine Conflict is Affecting the Markets.
Scroll to top